We have been meandering through North Carolina, each day very similar to the last.   But we had two unusual things happen.  I tried to get photos and wish I had had more time, but these things pass so quickly and I was pleased to get what I did.

The first was when we saw something swimming across our bow – up until then it had been birds – birds on the shore, birds in the air, birds in the trees.   I knew we would probably be seeing dolphins, but who would have thought this:

And then later in the day, this: 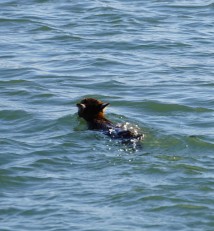 WHAT IS IT???   It was the size of a small labrador, swimming quite determinedly to the other shore.   I couldn’t believe it was a cat …. has anyone ever seen anything like this?  I’m sure it’s something that doesn’t happen every day, and we feel quite privileged to have seen it.

Another unusual sighting was an osprey – ours left the Chesapeake in August, and I was surprised when I saw the familiar silhouette.

Yesterday we stayed overnight in an anchorage in Camp Le Jeune.   The waterway travels though their base and is sometimes closed for firing practice.  I think we found their target!!! 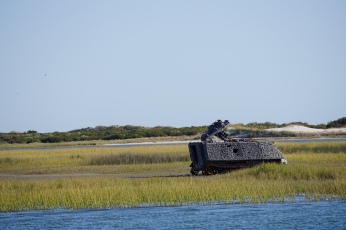 The sunset there was incredible.   We barbequed a butterflied leg of lamb and ate in the cockpit without being besieged by bugs and were able to enjoy it from start to finish.

Part of the relaxation of the waterway is not to have too much to do – we notice and talk about the things we travel past, from tree roots to birds and in the built up areas we have a lot to say about houses we like, or not, and what we would change.   It is interesting that when you are in the waterway you have no idea of what extends beyond the two shores you can see; you don’t know whether you are in a town or if these are isolated houses.   You speculate on who might live there and why;   the two pictures below were taken just a couple of hundred of yards apart. 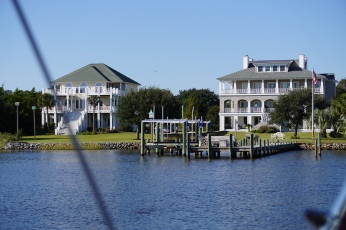 But it is the undeveloped marshes and cuts that we like the best – trees and vegetation right to the edge; those that have succumbed to the wakes of the boats leave behind interesting roots, it creates a habitat for new creatures and everything becomes a part of the cycle of life. 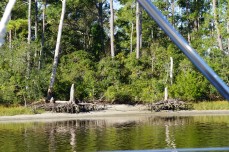 Of course, the boats that pass us and that we pass continue t be so interesting … 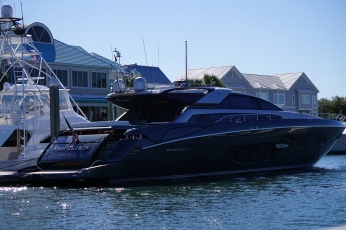 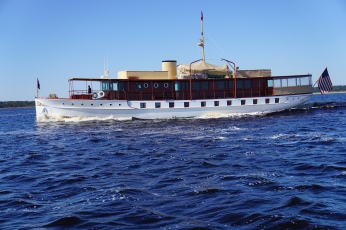 The one thing that plays a big part in travelling down the waterway are the bridges.   Some open on the hour, some every half hour, some don’t open during peak traffic times – you have to plan your day around the opening time and sometimes throttle back or push harder to make the opening – nothing worse than arriving 5 minutes late and having to hover for an hour!   Progress is also impeded or enhanced by the tides.   There are a lot of inlets to the sea and the incoming tide either slows you down or gives you a sleigh ride, depending on which side of the inlet you are.   It keeps you busy!!