George Town was the southern-most destination on our 6-month cruise.   Our turn around point.   And we were finally there!    We had heard so much about it – many of the cruisers down the waterway go there first – it is said that the weather and the water is warmer in December and January.   Some people put down anchor and spend the whole winter there.   There certainly is a lot organized – yoga, water aerobics (I participated; it was a lot of fun), beach volleyball, bridge, swap meets, dances, happy hours, trivia evenings – you name it.   Some people call it “summer camp for seniors”.   Like anything, you can join in or not, according to your style.

Mel and Gary were already there, as were our friends John and Denise McLinn on Sloop John Dee II with their two border collies, Bella and Bing.   We anchored at Monument Beach (there are three main anchoring beaches – Monument, Chat and Chill and Sand Dollar – each with their own vibe).   At night the anchorage becomes a little mini-city as people switch on their anchor and cockpit lights.   One of the things we learned is that if you go ashore at night you need to leave an identifying light on in your cockpit so you can identify your boat when you come back in the dark!   Lots of strings of multicolored Christmas lights; many of those multicolored solar inflatable lights with a flashing program  …. Whatever it takes!

You can also anchor across Elizabeth Harbour at the town, but we found it easier to just dinghy across when necessary.   We had looked at the charts for hours while we were preparing for the trip, but it is quite different when you actually arrive and the names take on a reality.    John and Denise’s dogs are really well trained  – they will sit, lie, come, go, fetch etc. on demand and they can confidently take them wherever they go.

The town is built around a completely contained small harbor.  You approach through a gap under a bridge – you have to line yourself up for the entry so that boats coming out can see you and wait; only room for one at a time.   Once inside you park your dinghy on the floating dock – it is as busy as a mall parking lot!    There are no marinas with gas docks; if you need fuel you cross to the Shell dock and take your containers.   Everything is safe, nothing ever gets stole, and the boaters all look out for one another.  A great community. 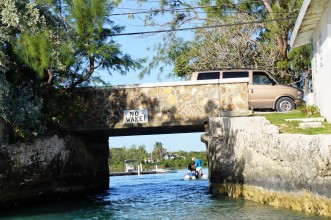 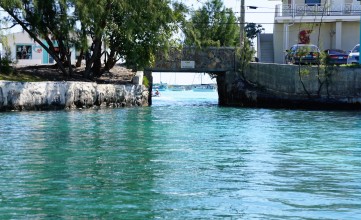 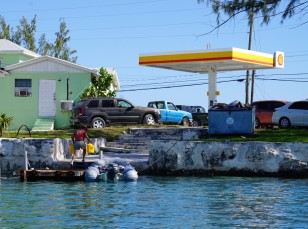 The buildings, as you can imagine, are full of tropical color.   Where else would you find the town administrative buildings painted bright pink?  A blue and yellow municipal dock – and a grocery store without any signs – but there’s no mistaking what it is.  Garth was delighted to find a coffee shop that served him a good latte – and they also had great quiche, pastries, muffins etc.   He was home!

We had a bit of excitement when an anchored boat, without owners aboard, dragged in a strong wind.   Just missed Sloop John Dee, and five blasts on the airhorn by Denise brought a bevy of dinghies to help.   The boat had got caught in someone else’s anchor chain and it took some sorting out.   Garth managed to get the engine started – unfortunately the anchor windlass didn’t work in the “up” direction, so it took some strength and management to get everything untangled   and the boat safely re-anchored.   Never a dull day! 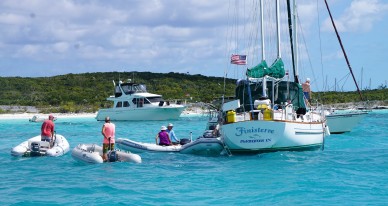 Eventually we decided that if we were to be home by mid April, it was time to leave.   We climbed to the top of Monument Hill and the photos we got just didn’t do justice to the wonderful view from there.  And a beautiful beach on the ocean side rewarded us for the climb!

We said a sad goodbye to Mel and Gary – they had friends meeting them in George Town and were not on the same schedule as us.   John and Denise left at the same time and we sailed up to our favorite – Black Point.   A visit to the great laundry where we sit outside and socialize while we all use the wifi to catch up with emails etc.; a visit to Lorraine’s mother who bakes the best bread; and a reality check as we watched the sharks circle as the fish were cleaned on the dock! 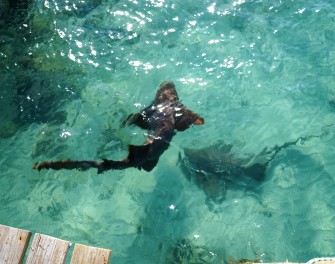 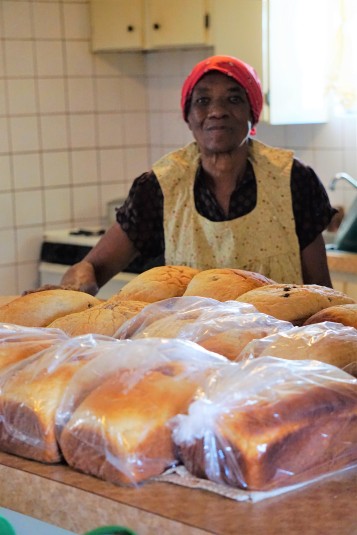 The next night was spent at Staniel Cay with the obligatory visit to the swimming pigs.   Sadly, the week before we were there, they had found seven of them dead.   There was a lot of speculation about the cause – evidently irresponsible people are known to feed them alcohol and other inappropriate foods.   But the inquiry revealed that it was because of the ingestion of excess beach sand.   People who bring food throw it onto the beach (I can understand that!! – I wouldn’t be holding my hand out) but it means that the pigs eat the sand with the food and it interfered with their digestive system.   It has never been a problem before but  the number of people coming over to feed them has increased and they are talking about putting restrictions on feeding them.   A sad tale of the demise of a fun event. 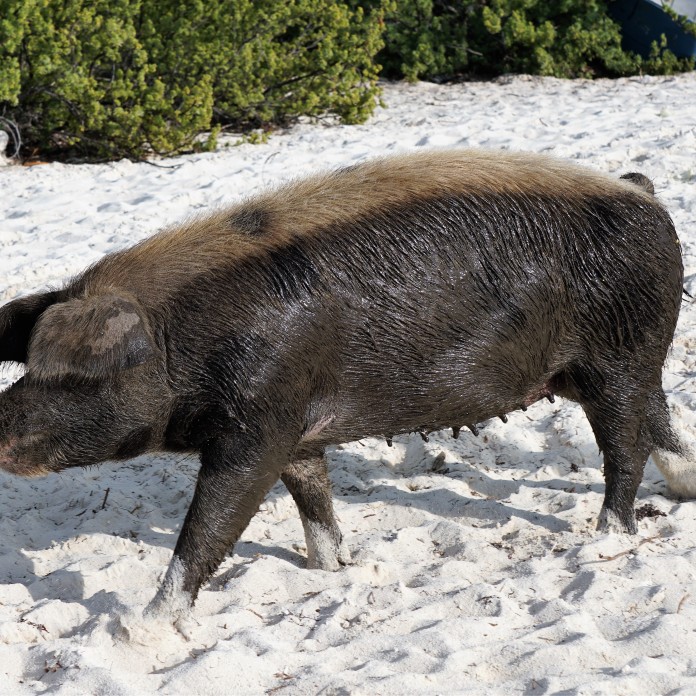 As we were dinghying over, a big noise and we saw this seaplane landing – right among the boats!   He motored over to the beach and cut his engine a bit too soon.   Never fear, Garth was near!!    He took a rope and towed the plane to the beach so that the passengers could be discharged – the pilot was very grateful.   A quick visit to the pigs, lots of photos, and back they got and took off again to the next attraction. 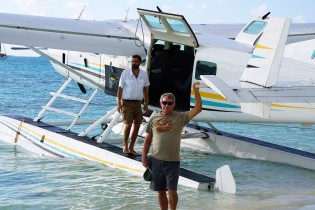 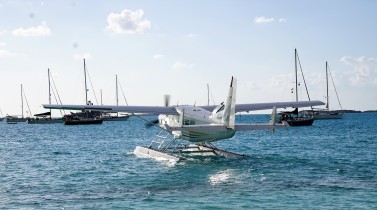 From the anchorage we could see all the big boats that had anchored in deeper water – they have fancy tenders that bring their passengers ashore, as well as a plethora of jet skis, speedboats etc. for their guests’ pleasure.    It was sobering to think about how much money was tied up in and around Staniel Cay!!

Another front was due to arrive, so we headed up to Cambridge Cay – our other favorite spot!   It is part of the Exuma Park where nothing can be caught or taken away, and so walks and rides are always interesting and rewarding.

We saw this little beach tucked behind some rocks and decided to investigate.   We were surprised to find a beautiful extensive sand flat behind the rocks.   The dogs loved it! 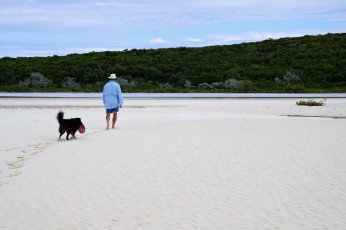 We had to scurry back as we saw rain clouds coming our way – lovely fresh water washed down the boat, and it was followed by the promising rainbow again. 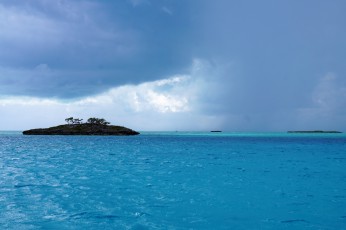 All the time we had been in the Bahamas we had been hearing about this “other” Jabulani – could hear them calling and being called on the radio etc.   Finally we found them in Cambridge.   Apparently their first boat had been a catamaran bought in South Africa, so when they bought their new boat, they kept the name.  They had also been hearing about us, and so it was mutually good to meet!    (Our Jabulani wants to be their Jabulani when she grows up!!)

We were there for three nights – some Mexican Train domino evenings with friends – and then on the last night we went to a beach where there was an unobstructed view of the horizon – determined that we would see the green flash.   Do you think we did or not? 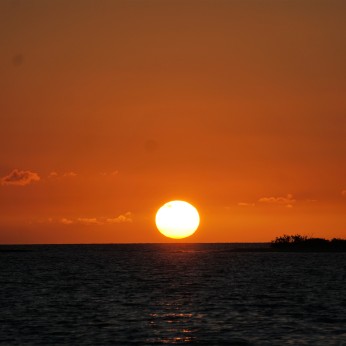 We left the next morning and made the crossing over to Eleuthera.   Tied up in the marina and had yet another spectacular evening on the beach watching the sunset.   It is going to be hard to leave all of this behind.   The marina is very close to the Cape Eleuthera Island School where high school juniors and seniors can spend a semester learning and practicing marine ecology.   It sounds fantastic and we were sad to be there on a weekend – would love to have taken a tour.

From there we sailed the whole of the next day up Eleuthera and through Current Cut – again – and back to Spanish Wells.   We are on a mission and moving quickly now.    Another couple of nights in the marina as yet another front moved through.   We were staging to cross back to the Abacos as soon as possible.   Still find these “pole sitting” birds so interesting.   The one on the right brings to mind a retired military type, with arms crossed behind him and knobbly knees extending from his big baggy shorts while he surveys the passing ship traffic – kind of like my Dad!!!! 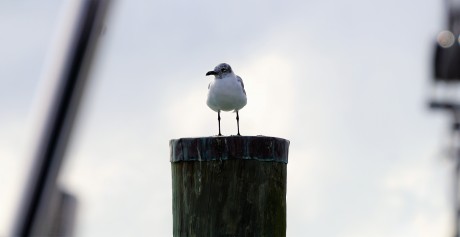 At the moment the boat is back in Hope Town – we had a good crossing, big waves, but the wind was in the right direction.   You have to take advantage when the conditions are right or you can find yourself sitting for weeks waiting for another opportunity.   We hope to go to the Barefoot Man concert at Nippers on Guana Cay (apparently a not-to-be-missed event, but I’m not sure about 1000+ people shoulder to shoulder?!) and then head up to Green Turtle and from there make our way back to the mainland and up the waterway.   Hard to believe it will be over soon, but we are both ready to get back to “normal” life and our children and grandchildren – and home, and big showers with lots of water, and grocery stores, and dishwashers and double door refrigerators …………