We arrived in Hope Town and fell in love all over again!    It is situated on Elbow Cay and is built around a perfectly enclosed harbor so that no matter which way the wind blows, you are protected and the water is calm.   The icon of the town is its lighthouse – built in 1864 it is the last lighthouse in the world that is hand operated without any electricity.   I’m going to  quote the brochure and give you some facts and figures – the lighthouse warrants it:

“The lens and turning equipment in this lighthouse, made in the early 1900s by Chance Brothers of Birmingham, England, is still in place today, working beautifully.  The lighting source is a 325,000 candlepower “Hood” petroleum vapour burner.   A hand pump is used to pressurize the petroleum (kerosene) which is in the heavy green iron containers below the lantern room.   The fuel travels up a tube to a vapourizer within the burner which sprays into a preheated mantle.   Pressurized camping lanterns operate similarly.   The beautiful Fresnel lens with its five “bulls-eyes” concentrate the mantle’s light into piercing beams which shine straight out towards the horizon, instead of up and down and all around, as in a camp lantern.

The entire lens with its brass work, bull’s-eye lenses and additional prisms weighs about three or four tons and floats in a circular tub containing about 1200 pounds of mercury or “quicksilver”.  This reduces the friction, which would otherwise be caused by wheels or rollers.   Weights on long cables, when wound up to the top of the tower by a hand winch, are able to, through a series of bronze gears, rotate the heavy apparatus, once every 15 seconds.   It works like a gigantic grandfather or cuckoo clock, and the keeper on duty has to wind up the weights every two hours.   This 19th century system operates totally without electricity and runs very smoothly at that.   Thanks to its dedicated keepers, the Elbow Reef Lighthouse continues to shine exactly as it has every night for almost 80 years.” 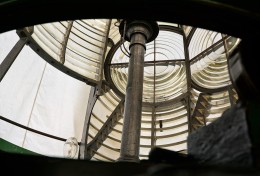 Hope Town works hard to maintain the lighthouse and there are many fundraisers to keep it going.   But somehow locals and visitors alike feel a pride and identity with the lighthouse and deep pockets are often emptied for a good cause.

We walked to the top, all 101 stairs, and the view was spectacular

This is a picture of the last 14’ Abaco dinghy built in Hope Town by Winer Malone, a local craftsman, who built them entirely with hand tools and without plans.   In fact there are two versions, a 14’ and a 12’ – the size reduced when he moved house and the new house had a 12’ shed instead of a 14’ one!!

Our friends from Annapolis, Muffin and Will Heyer, come down on their boat every year to spend the winter in Hope Town.   They are very involved in local volunteer activities and we met some lovely people with them.   Will has one of the five Abaco dinghies left in Hope Town, and came sailing by in it one day – of course Garth had to try it out!!    It is called Mac & Cheese;  one of the others is called Peas and Rice – both popular side dishes down here (might be spelled Peace and Rice I think).

Later that day we shared stories and stone crab claws with Will, Muffin and their friend Bill Fulton, and Mel and Gary.   A great evening. 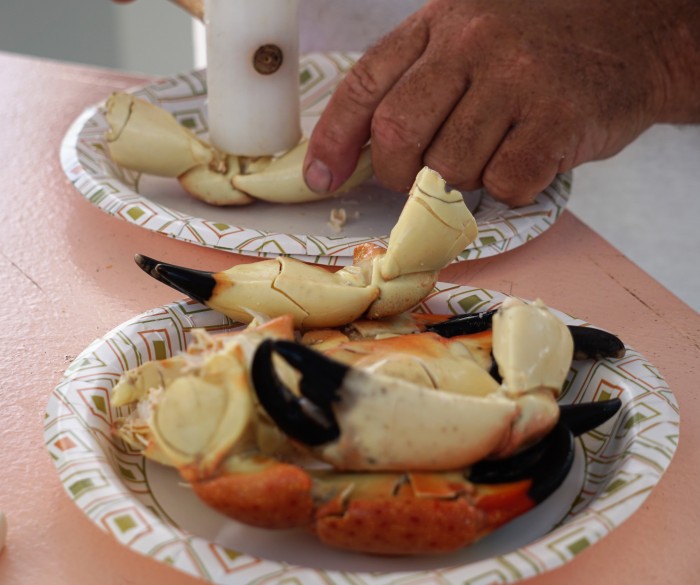 After two days on a mooring, we decided it was time to explore and we sailed down to Sandy Cay to go snorkeling.   The sea was a little choppy and the waves were a little strong so we didn’t snorkel for too long, but it was good to be out in the water.   Gary took some photos with his go-pro – he wasn’t sure why they were not properly focused, but I want to put them in as a reminder for us.   Snorkeling is amazing – we have wet suits so it’s not cold, and the only sound you hear is yourself breathing.   Everywhere you look things are moving and catching your eye and you drift over the coral beds just taking it all in.   We are tempted to try and get an underwater camera, but then you become “the photographer” instead of just an observer of wonderfully natural beauty.   It’s a toss up. 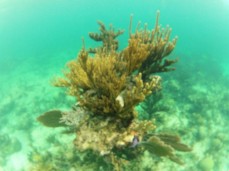 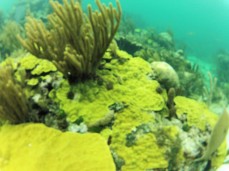 On the way back the sky clouded over and the scenery was all the more dramatic for it.

We were lucky that our visit coincided with the annual Combustion Music Concert which benefits three local charities.   An American who has a home on Hope Town came up with the concept – he is in the music industry and invites his country and western songwriter friends, at his expense, to come to the islands.   They have four performances over the weekend – this year there were 11 songwriters singing their No. 1 hits – between them they have over 80!  They don’t charge for their appearances and all the donations go directly to the charity.   We are not country and western followers, but the music was great and the crowd was energized and it was a great evening.

We decided that we wanted to get some sailing in – no matter where the wind took us.   On Sunday we unhooked the mooring ball and set off for Treasure Cay.   The conditions were perfect; the seas were calm and the wind was behind us.   Gary and Mel have a spinnaker, and we had our sails set wing and wing, and it was a day to remember.

The water here is so clear and you can see the bottom at 25ft.   I tried to capture it on the camera; these show it a bit, but you need to be here!! 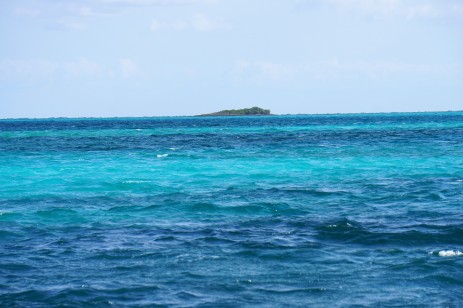 In the third picture above the dark bit is the shadow of our sail on the ocean floor!

We picked up another mooring ball in Treasure Cay and went ashore for some frozen drinks and football.  Treasure Cay has a 3-1/2 mile beach – rated as one of the top ten in the world.   We went for a walk at sunset; the colors were soft and muted, the water lapped the shore and the sand at the edge was hard and easy to walk on.    The shadows on our footprints made them look as though they puffed up instead of sank in – and the shadows in the soft sand made incredible relief patterns. 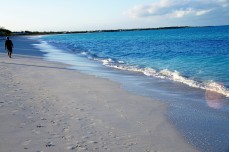 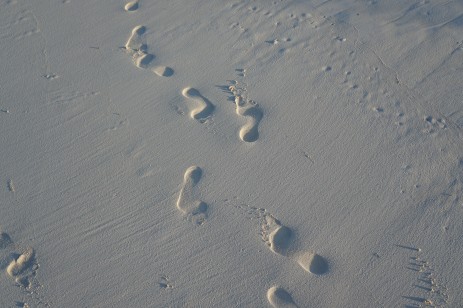 The restaurants down here are expensive.   You can understand it, but the budget doesn’t always stretch to too many meals eaten ashore.   So I made an appetizer and Mel cooked the most delicious pasta with scallops in a lemon sauce – worth twenty restaurant meals.   We have been lucky to sail along with Second Sojourn – they are great friends it is always nice to have a second opinion on weather and destination; Garth and Gary have an ongoing cornhole challenge while Mel and I keep in touch with our friends and families. 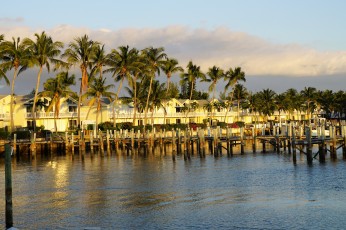 The weather was perfect for sailing again yesterday so after another long walk on the beach we left Treasure Cay and headed around the Whale Cut and came back to Green Turtle Cay.   Love it here in White Sound – we will try and explore the beach side of the island this morning, and then head into town for some lunch and a bit of provisioning.

We will head back to Marsh Harbor by way of Man O War Cay tomorrow.   Garth and I are flying back to the States on Saturday for Penny’s birthday and Christmas.   We will leave the boat at a dock in a marina while we are gone (we still have a freezer full of frozen food that needs to be kept cold!).   We are so looking forward to seeing Kate and Will & Penny, and also our house, our neighbors and our friends!   Not sure I’m ready for the cold though – it has been between 70 and 80 degrees here, cooling off at night with a fresh breeze through the hatch above our bed – perfect!!

This little boy was playing peek-a-boo with his mom at a coffee shop in Hope Town – I couldn’t resist his delightful face!    I definitely need that grandchild fix!!!

So this may be the last blog until the new year – when we come back on Dec 29th Kate and the kids will come with us for a week.   We are so looking forward to Will and Penny enjoying the beaches and seeing the magical world under the water when we go snorkeling!   We wish everyone a very happy and healthy Christmas and New Year.