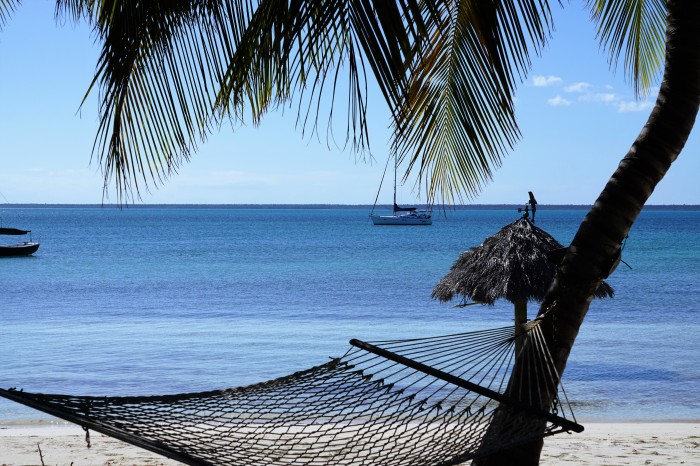 We left Lake Worth at 5.00 am – still dark, but the light was coming into the sky.  Three of us left togther – Gary and Mel on Second Sojourn and George Shipp on Shipp Mates.   He had anchored near us in Lake Worth and was single-handing all the way from Canada and I think he was happy to be in convoy with us.   The forecast was not perfect, but very do-able we thought.   It started out lumpy and I took my Dramamine!  The sun came up and we said goodbye to the mainland – it is a very special experience to look around and the whole horizon is only water.   As the day wore on the seas flattened and we ended up motor sailing in a perfectly flat deep blue sea.   I love the way the water looks and colors from the sky reflect on it. 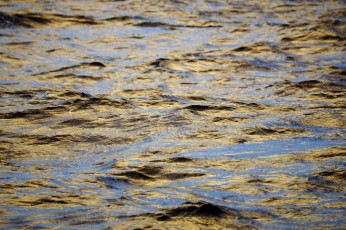 We had anticipated a really long ride over, but we arrived at West End by 3pm – a very successful day.   Unfortunately West End had been badly hit by the hurricane with many houses destroyed.   The marina didn’t seem to lose too many buildings, but there was limited power and water and their restaurant and bar were closed.   Not to worry – we hauled out the steaks and champagne and celebrated our arrival in grand style!   As anticipated, the water is clear and turquoise; the beach is white and the people are the friendliest around.  Old Bahama Bay is a great resort and entry point to the Bahamas. 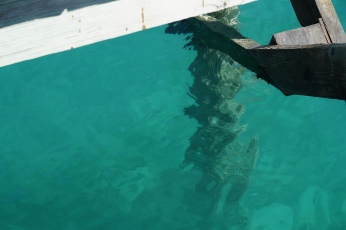 The picture of the piling shows how clearly you can see the bottom – ten feet of water.   We decided to stay on Sunday as the winds were strong – we found a friendly diver who had just brought in his catch of lobster – we were set for dinner!    I’m including a picture of the beach bar which didn’t survive the storm – and the pool was pumped out, so for our Bold Group from 2007/8 we weren’t able to relax quite as much as we did then. 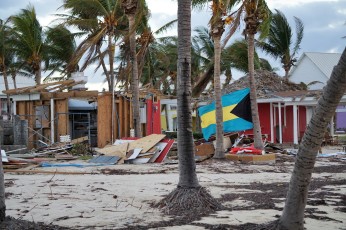 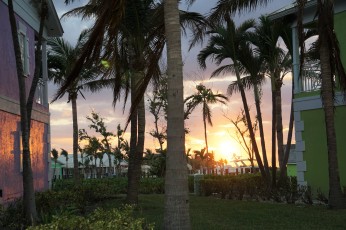 The three of us set off early again next morning to head for Great Sale Cay.   Nothing there, but when the sun sets and you are sharing a glass of wine with friends, what more could you wish for?

I often wonder which side of the sunset I prefer – the blaze of glory as the sun disappears, or the soft pinks and mauves that fill the sky behind you.  The night is so black – not a light anywhere and the stars just shimmered.

When we go out to sea, we put our dinghy on the foredeck for safety – we wore lifejackets on the way over, even though it was so calm.   You shouldn’t put yourself in a position that you might regret later.   Some pics of the command post – you can see the instruments showing our course – touchscreen so you can easily zoom in or out, and the wind instrument showing strength and direction.   (I should have tidied up a bit before this pic!) 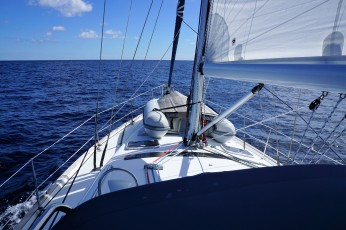 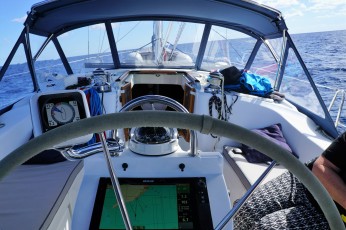 Garth wants to give a particular shout-out to our friend Terry Clarence, who has the Rolly Tasker Sails dealership in Annapolis – he is SO happy with the wonderful sails that Terry supplied us!  He took these pictures of the sail shape for those of you that will appreciate them!

Our next planned destination was Green Turtle Cay, but we decided to stop on the way – we snorkeled off Moraine Cay and were rewarded with pristine coral banks – my impression was that the coral and fish were all purple and yellow and everywhere you looked could have been a calendar picture!   The tide was running through quite fast, so we dinghied out and then drifted back over the reef holding onto the dinghy.   We did this three times – could have stayed all day!    Of course, this also presented my personal biggest challenge – getting back into the dinghy.   We had a rope stepladder which helped some, but as you stood on it it shot underneath the boat …. needless to say my clamber in was not elegant or graceful!   But I did it and am here to tell the tale.   I would do anything for an underwater camera to be able to share the amazing world under the sea that we saw that day.

From there we set off for Manjack Cay.  We were a little late and sailed into the anchorage as the sun set.   Another contrast of the bright sunset and passive light behind. 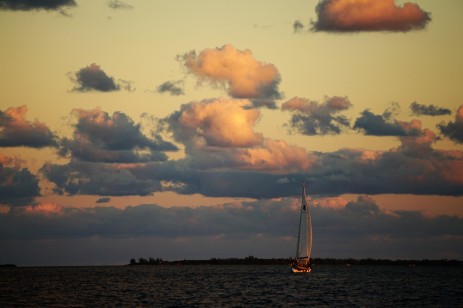 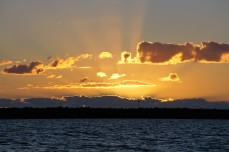 This island is owned by a family who have lived there for 18 years – they have generously shared their island and made paths for visitors to get to the beach on the other side.   It was about a mile away, but the path through the brush was cool and dappled and we saw so much of the vegetation up close which you can’t really appreciate as you sail by.   The beach was spectacular!! 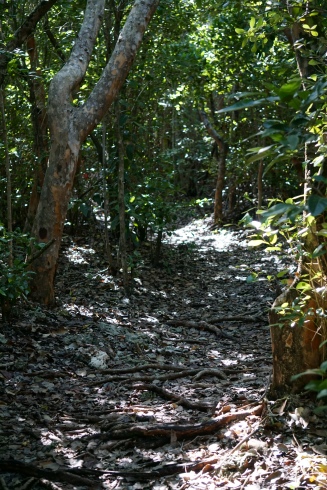 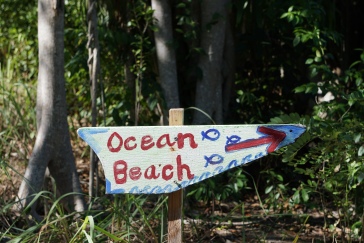 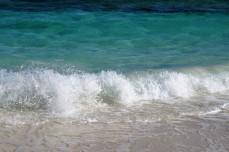 Lots of rock pools and their interesting inhabitants.   What looked like a simple hole in the rock revealed a whole ‘nother world when you looked closer …

We sent to Green Turtle that day – but that will have to be the next blog, as the internet service that I am “borrowing” is very slow and the pictures are not loading quickly enough.  We tried to get our phone set up and have a bit of a hiccup – apparently the iPhone 4 that I brought for the Bahamas sim card does not have the latest software, so my next task is to download it – at this speed, might take a while!

Hope everyone had a great Thanksgiving and you are relaxing on this long weekend.   Christmas is around the corner!

5 thoughts on “We’ve arrived in Paradise!”