I don’t mean to bombard you with blogs – just that I have more pictures and if I don’t get it sent while we are at a place with wifi, they just accumulate and the next blog takes forever!  Also, I want to say thank you to everyone who comments and leaves messages – I do see them but can’t load the blog to reply until the next time we get to wifi.   But I appreciate the support; it’s nice to know that friends are enjoying following along.   I get a bit bamboozled by technology – I don’t know how to get back to things – so please know that I am seeing and appreciating your input!

We knew there was a big front coming and decided to head a little south to Hatchet Bay, a completely enclosed harbor, and ride it out there.  You have to go through a narrow cut where the tide is extremely strong.  You’re supposed to go through at a slack tide but I think we miscalculated a little – our boat speed was 6.4 knots but the current was ripping us through at 10.5!!   As we came through the other side we were delivered into a beautiful sound with a sand bank, people paddling and incredibly clear water – you can see the bottom clearly at 20 ft. 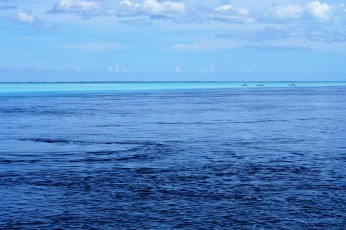 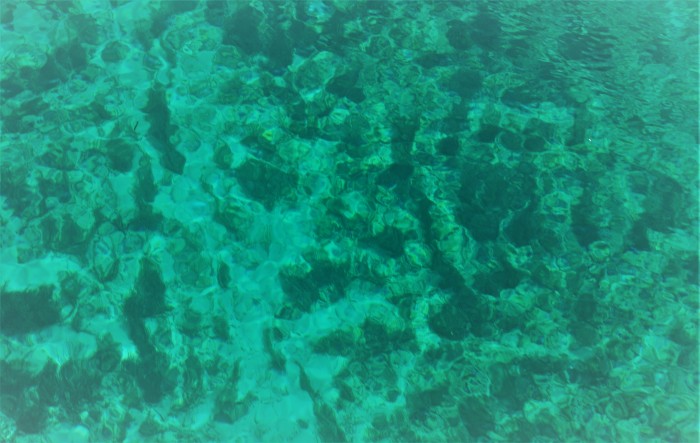 The coastline is rocky and sheer – you can sail along very close to shore and the rock formations are amazing.   There was one house that we both decided we wanted – a great all round porch and a stairway down to the water with a ladder to get in and out.   I’m sure there are many lobsters down along that ledge, just waiting to be our dinner!  We almost went past the entrance to Hatchet Harbour – you will see how narrow it is from the sunset pics that follow. 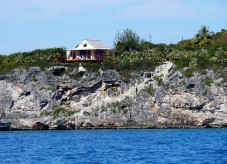 We were hoping to tie up to a mooring ball to ride out the storm.   No such luck – they were in terrible shape, with no maintenance having been done for two years.   The guy in charge of them said he wouldn’t use one without having an anchor out as well!   We made the decision to stay overnight at anchor and then head back to a marina in Spanish Wells to ride out the storm.   The trip down to Hatchet Bay, although technically a waste of time, was an absolute gift because the next morning we had the most spectacular sunrise – not a breath of air and absolutely breathtaking.  And the “behind” pictures are just as special. 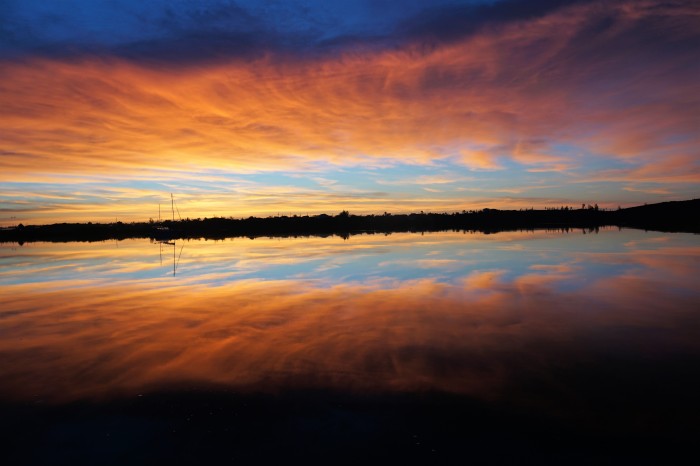 I couldn’t help imagining the gulls singing along to Y-M-C-A !!!!!

The day was perfect.   As we motored back to the cut it was so still that there was no horizon – two fisherman seemed suspended in air.   As always, I was drawn to the patterns in the water, and as always, there were interesting craft that passed us by. 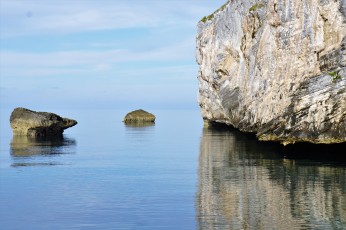 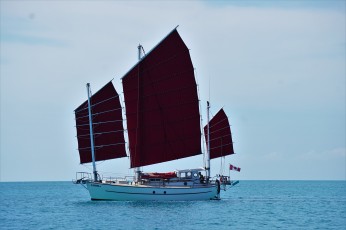 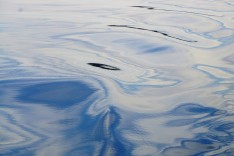 Spanish Wells is a great little town.   We tied up in the marina and while the weather was still good, rented a golf cart and explored.   An interesting fact was told to us – unlike many islands where the young people move away, there are enough jobs and activity here to keep them, and you can sense this as you drive around and see neat homes and neighborhoods.   Down on the waterfront the buildings are fun …. 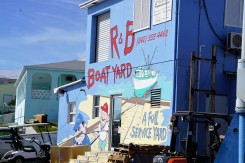 and water transport is used very creatively!   The cargo on the shrimp boat appeared to be scrap metal.   But they don’t take all the scrap metal away, much of it remains, rusting, all over the island.

We stopped at a beach bar, and saw some beautiful beaches, and even an osprey who was wintering here (not sure that the wiring on that pole would pass code in the US!!) 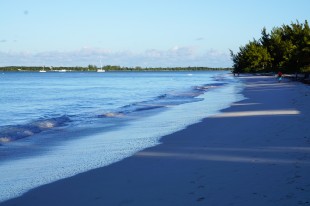 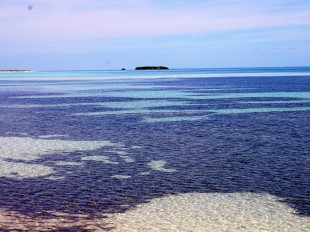 The marina filled up with like-minded cautious cruisers as the storm approached.   We were grateful to be tied up securely to a dock – the winds, as forecast, gusted to 50 knots and it was sustained at about 35 knots for a long while.   It poured with rain; we had thunder and lightening – everything on the boat got a good wash! 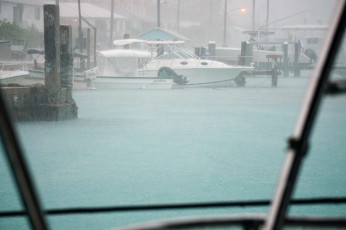 It is still blowing some, but we will leave today and go back to anchor at Royal Island  and then back down Eleuthera, heading to the Exumas by the end of the week we hope.